Networks and Neighbours (N&N) works in collaboration with Gracchi Books and Punctum Books to publish research in a variety of forms, including journal articles, digital series, and open texts. As of summer 2020, proposed books deriving from N&N research activities are sent to Gracchi Books for review and potential publication, in print and digital format, and following the same no-fees OA principles as N&N.

Gracchi Books welcomes proposals for books, performance pieces and other forms of expression of non-fiction and historical fiction. Its specializes in medieval history and critical theory, including but not limited to related fields, such as historiography and methodology, historical theory, anti-philosophy and anti-history, oral history, political theology, literary and manuscript studies, medieval studies, art and visual studies, music, dance and performance theory and praxis, legal studies, popular culture and the past, and other areas of erudition that lie within, outside or between academic, creative, and wider / other paths of enquiry.

Gracchi Books is an imprint of Punctum Books, originally founded in New York in 2011 and with editorial offices in Santa Barbara and The Hague. Punctum is an independent, not-for-profit, public benefit, 501(c)(3) corporation registered in Santa Barbara, California. It is an open-access publisher dedicated to radically creative modes of intellectual inquiry and writing across a whimsical para-humanities assemblage (in which assemblage you will find humanists keeping rowdy and thought-provoking company with social scientists, scientists, multi/media specialists, artists, architects, and designers). Punctum has a special fondness for neo-traditional and unconventional scholarly work that productively twists and/or ignores academic norms, with a special emphasis on books that fall length-wise between the article and the monograph—id est, novellas, in one sense or another. Punctum also takes in strays of any variety. This is a space for the imp-orphans of your thought and pen, an ale-serving church for little vagabonds.

Writing circa ad 731, Bede professes in the introduction to his Historia Ecclesiastica Gentis Anglorum that he will write his account of the past of the English following only “vera lex historiae.” Whether explicitly or (most often) implicitly, historians narrate the past according to a conception of what constitutes historical truth that emerges in the use of narrative strategies, of certain formulae or textual forms, in establishing one’s own ideological authority or that of one’s informants, in faithfulness to a cultural, narrative, poetic or tradition. If we extend the scope of what we understand by history (especially in a pre-modern setting) to include not just the writings of historians legitimated by their belonging to the Latinate matrix of christianized classical history-writing, but also collective narratives, practices, rituals, oral poetry, liturgy, artistic representations and acts of identity – all re-enacting the past as, or as representation of, the present, we find a plethora of modes of constructions of historical truth, narrative authority, and reliability.

Vera lex historiae? is constituted by contributions that reveal the variety of evental strategies by which historical truth was constructed in late antiquity and the earlier middle ages, and the range of procedures by which such narratives were established first as being historical and then as ‘true’ histories. This is not only a matter of narrative strategies, but also habitus, ways of living and acting in the world that feed on and back into the commemoration and re-enactment of the past by communities and by individuals. In doing this, we hope to recover something of the plurality of modes of preserving and reenacting the past available in late antiquity and the earlier middle ages which we pass by because of preconceived notions of what constitutes history-writing.

Ian Wood, The Christian Economy in the Early Medieval West: Towards a Temple Society

The establishment of Christianity in the late- and post-Roman world caused an economic as well as a religious revolution, but, while a great deal of attention has been paid to the religious developments of the period, the impact of the establishment of the Church on the economy has attracted remarkably little attention. The Christian Economy of the Early Medieval West: Towards a Temple Society examines the chronology of the Church’s acquisition of wealth, and particularly of landed property, as well as the distribution of its income, in the period between the conversion of Constantine and the eighth century.

In this book, the society that emerged as a result of the Church’s acquisition of land is interpreted in the light of the anthropological model of the “Temple Society,” a concept developed from Karl Marx’s so-called “Asiatic Mode of Production.” The emergence of a socio-economic system dominated by the Church is presented as a crucial development in the history of western Europe. 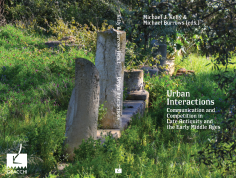 Urban Interactions: Communication and Competition in Late Antiquity and the Early Middle Ages

Urban Interactions is volume is dedicated to eliciting the interactions between localities across late antique and early medieval Europe and the wider Mediterranean. Significant research has been done in recent years to explore how late ‘Roman’ and post-‘Roman’ cities, towns and other localities communicated vis-à-vis larger structural phenomena, such as provinces, empires, kingdoms, institutions and so on. This research has contributed considerably to our understanding of the place of the city in its context, but tends to portray the city as a necessarily subordinate conduit within larger structures, rather than an entity in itself, or as a hermeneutical object of enquiry. Consequently, not enough research has been committed to examining how local people and communities thought about, engaged with, and struggled against nearby or distant urban neighbors.

Urban Interactions addresses this lacuna in urban history by presenting articles that apply a diverse spectrum of approaches, from archaeological investigation to critical analyses of historiographical and historical biases and developmental consideration of antagonisms between ecclesiastical centers. Through these avenues of investigation, this volume elucidates the relationship between the urban centers and their immediate hinterlands and neighboring cities with which they might vie or collaborate. This entanglement and competition, whether subterraneous or explicit across overarching political, religious or other macro categories, is evaluated through a broad geographical range of late ‘Roman’ provinces and post-‘Roman’ states to maintain an expansive perspective of developmental trends within and about the city.

The Art of Compilation: Manuscripts and Networks in the Early Medieval Latin West

The complex road from selecting a text in the early middle ages to producing a copy of it in a book is still poorly understood, yet it is the key to the historical context of medieval books. The practice of knowledge selection consisted of three key stages: the intellectual selection of the textual content of manuscript collections; the pragmatic action of arranging the textual content in a draft form by authors or editors; and the material representation and aesthetic exposition of texts in manuscripts. These stages were part of a linear development, but also exercised reciprocal influence upon one another. By tracing this process in surviving manuscript collections we can better understand in what practical ways knowledge was encoded, and how these often innovative and experimental practices contributed to the emergence and consolidation of both intellectual and scribal traditions. This has important implications for how we understand education, reform and the exercise of power in the early middle ages. Most importantly, this approach re-focuses attention on the medieval manuscript book as a dynamic, constantly changing object, entangled in intellectual and cultural networks, constructed and deconstructed by different people, and transmuting in both form and meaning over time. By considering manuscripts not as the static, permanently bound objects they are today, but rather as bodies of evidence for the layered relationships between texts and their material supports, we gain a more nuanced view of medieval manuscript culture as driven by the agency and intellectual exchange of the people that created it.

This volume is the product of a set of Networks and Neighbours’ “Practices of Knowledge Selection” events focusing on the connections between the texts and codicology of manuscript collections. The papers examine the key questions around the broad themes of knowledge selection, material representation, and scribal agency. What were the practices behind the selection of texts and text extracts? Who made the choices and why? In what different physical appearances did scribes put together collected texts? What can we know about the relationship between manuscript collections and their draft forms (e.g. wax tablets/schedulae)? What influence did these draft forms have on practices of knowledge selection? What new developments in book culture might have arisen as a direct result of increasingly sophisticated text selection practices? How was knowledge acquired and organized generally?

The Prosopography of the Visigothic Period in Gaul and Iberia, c. 400-750

Every student and scholar of the Visigoths over the past half-century has been aware of and used Luis A. García Moreno’s Prosopografía del Reino Visigodo de Toledo. Published originally by the Universidad de Salamanca in 1974, García Moreno’s Prosopografia has been for generations a foundational resource for researchers in Visigothic studies, and it is still so today. The way scholars approach texts, engage resources, share research, teach the early middle ages, and communicate with one another and with students has, however, changed in significant ways since the early 1970s. Complementing those developments has been, of course, about a half-century of new research, which includes alternative approaches to understanding the boundaries of “Visigothic” as a term of identity, of geography, of interpretive category, etc. That is why, although García Moreno’s Prosopografía is still a critical resource in Visigothic Studies, we feel that it is time to produce a new version of that iconic text. Additionally, our new Prosopography of the Visigothic Period finely complements N&N’s other related publications and series, including the Visigothic Symposia, the critical edition of the Liber Iudiciorum, and Alberto Ferreiro’s Late Antique-Visigothic Gallia and Hispania: A Bibliography, 2016-2018. The Prosopography significantly expands García Moreno’s Prosopografía, but is its own unique publication, one that is open-access, in digital format, in English, and with a revised critical apparatus. It is imagined as a sort of “living” publication, similar to Alberto Ferreiro’s Bibliography, so please feel free to send suggestions.

In the spirit of cooperation, our fellow colleagues engaged in the study of Late Antiquity and the Early Middle Ages from across the disciplines continue to share their prosopographical data and offer their assistance. We would especially like to thank Purificación Ubric Rabaneda and Fabian D. Zuk, who have provided – in addition to intellectual support and their time – their respective fifth-century prosopographical works for inclusion into our Prosopography and for circulation by N&N. Ubric Rabaneda’s “Anexo Prosopográfico” is part of her PhD thesis for the Universidad de Granada, La Iglesia y los Estados Bárbaros en la Hispania del siglo V (409-507), while Zuk’s prosopography of fifth-century bishops is part of his MA thesis, Fabian D Zuk – “De episcopis Hispaniarum: agents of continuity in the long fifth century”.

Late Antique-Visigothic Gallia and Hispania: A Bibliography, 2016-2018, by Alberto Ferreiro

For three decades, Alberto Ferreiro’s renowned bibliography of the Visigoths has been a leading source for scholars, students and all those interested in the history of the late antique and early medieval Iberian Peninsula and the Western Mediterranean. In collaboration with N&N, Alberto is now bridging this seminal work in Visigothic Studies into the digital and open-access world. This entirely new bibliography, which begins with the year 2016, is freely accessible and provided with up-to-date links to sources, including to full-texts when available. The bibliography is meant to be interactive and thus we encourage readers to send suggestions and links to material.